Learner drivers in England, Wales and Scotland will be allowed to have lessons on the motorway by next year, the government has announced.
The lessons would be in a dual-control car with Drive4Life Instructor. 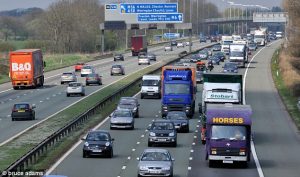 Currently only those who have passed their test can drive on a motorway, but in 2015 the DfT said it would consider a law change.
Transport Secretary Chris Grayling said the lessons would make UK roads safer.
He said: “Allowing learners to drive on motorways in a supportive environment will help them develop a practical understanding of how to use motorways safely before driving independently.”
Road deaths link
Mr Grayling said young drivers were more likely to be killed or seriously injured on Britain’s roads – and a lack of experience was an “important factor”.
“The UK has some of safest roads in the world and we want to make them even safer,” he said.
New driver Leonnie Wharton, from Wigan, told the BBC: “I passed my test a week ago and have been on the motorway twice on my own.
“It was quite a scary experience, I’d read up on the theory but actually doing it is completely different.
“I’m apprehensive about doing it again on my own, but I don’t want to get to the point where I actively avoid going on the motorway.”